As with most new arrivals, the Income for Life portfolio which I launched less than two years ago has occupied more of my attention than I intended. As a result, its predecessor, the Rising Income Retirement Portfolio (RIRP) – nine years old in February – has effectively been ignored for the second 12 months in a row. Again no changes have been made to the portfolio, and this is exactly what was intended when it was constructed: a low maintenance selection whose dividend increases would comfortably outstrip inflation.

To be frank, this has not really been a very demanding target over the past few years, and even though the most recent annual inflation rate for the RPI has risen to 2.2%, as Table 1 shows the fund’s underlying income went up by 5.5% – two and a half times faster. 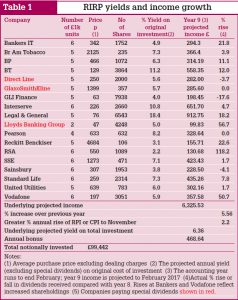 I no longer include special dividends in the basic calculations, rather treating them separately as “bonuses” because they are so unpredictable: this year’s specials from Direct Line, Glaxo and Lloyds provide a further £468, equivalent to nearly 0.5% on the original investment, but in fact the total bonus sum is nearly £2,300 less than the previous year’s truly exceptional and clearly unrepeatable receipts.

The future will be harder

But life is going to be tougher for the next couple of years. Since June and for most of the coming year, dividends of companies designated in dollars or euros, such as BP, HSBC or Vodafone, or with significant international earnings such as BATs or Reckitt Benckiser, will benefit from the fall in sterling which the foreign exchange markets so obligingly gifted the Brexiteers. But by the same token imported inflation will increasingly start showing through, so I must look carefully at some of the small print behind my funds’ performances.

The last column of Table 1 shows the actual rises or falls in income compared with the year before. The fact the market is around all time highs means the RIRP has unrealised capital gains approaching 40 per cent which means I now need to have pretty good reasons not to weed out shares which have gone ex growth or cut their dividends. The next article in April may see me jettison Pearson, Sainsbury and the two utilities unless they can raise their games.

IFLP beats its target in year 1

Table 2 shows that the junior portfolio, the Income for Life, will complete its first fully invested year in March with flying colours, delivering an underlying yield of over 5.2% on the original capital, usefully above the original 5% target.

There have been a lot of changes to the IFL since the last full table was published 6 months ago. Not only does it now reflect my post-Brexit decision to realise some of the inexplicably large capital gains at UIL and reinvest in what seemed to be the unreasonably depressed Galliford Try, but also the rather surprising year-end takeover of Alternative Networks.

When I originally bought Alternative Networks for the portfolio in July I was attracted by the rising dividend record on the basis of which I had myself invested when the share price was significantly higher and the yield correspondingly lower and so below the IFL’s initial targets. This was reinforced by the company’s confident forecast of a further 10% dividend increase this year. 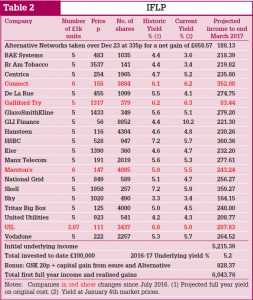 I can only conclude the directors suffered a collective case of terminal post-Brexit depression, because they have since unanimously recommended a cash takeover from one of their biggest rivals. A reference to “Brexit uncertainty” is the only new factor I can discern in the lengthy statement of recommendation which makes any sense at all. For all the talk about how the group has created long term value for shareholders, unless – like the IFL – you were lucky enough to buy between the end of May and the beginning of September this year, there is precious little profit for anyone who bought the shares after mid 2013, and losses for anyone who bought during 2014 or 2015 – as I did. The all time high in 2014 was 570p – 70% above the recommended takeover price. 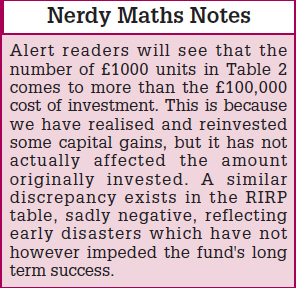 So I think the IFL is very lucky to be able to book a 15.5% profit, even though it is deprived of the forecast £188 initial January dividend. I am applying some of the gain to replace the lost dividend.

I dislike takeover bids for two reasons. They sometimes force me to crystallise a paper loss I might have been happy to live with, as I was with my personal holding based on the dividend and pre-Brexit forecasts. But even when bids crystallise a gain they force me to make reinvestment decisions at a timing which is not of my choice.

I thought about using the Alternative Networks bid proceeds to bring in a new share, but because the portfolio was constructed in the space of 12 months it has never been able to benefit to any significant degree from the multi-year pound-cost-averaging drip investment technique employed to create the RIRP.

So I have applied the RIRP rules, and topped up on shares whose fundamentals seem unchanged from when I originally bought them, but whose share prices are either still around or below my original purchase price. To my surprise and delight one of the qualifying candidates was Galliford Try, so my maiden £2,000 investment is now topped up to the standard 5 units, and the remaining £2,000 is split between Connect and Marston’s. All three shares are yielding more than the fund’s current average 5.2%. I have booked the capital gain minus the £188 dividend to the “bonus” line.

The IFL will face the same challenges as the RIRP as inflation starts rising, but with the disadvantage of initially having been forced to invest in higher yielding shares, the corollary to which is normally lower dividend growth longer term. Like the RIRP it also faces a further dividend cut from GLI Finance, but even if GLIF pays no other dividend this coming year than the remaining quarterly to which it is committed in March, the full year dividends from Galliford Try and my other increased holdings already largely make up the loss.

I also admit I quite like leaving a failure in if I can afford it. There are two reasons: sometimes they come right, if you can wait long enough; and meanwhile they are an enduring reminder that none of us gets it right all the time, and should therefore not beat ourselves up too much for our failures.