RIRP – Flexing the rules now to save for that rainy day

Three months ago a surprise cut in the dividend of what had been one of my star performers, Interserve, forced me to apply dramatic surgery to the original Rising Income Retirement Portfolio (RIRP)  in order to Brexit-proof it for the inflationary challenges then only just starting to appear.

Three months on and the inflationary pace has accelerated to 3.7% by the highest measure – and I am expecting a peak of at least 5%, confirmed by the fact the come-on 3-for-1 offer of one of my favourite beers at Tesco has just gone up 5%.

Table 1 shows the portfolio is likely to come out smiling.

The average full year yield on the sums invested is up to 6.4%, 60% up on the original 4% target 10 years ago, and more than twice the highest measure of inflation over that time. The last figure of column 2 shows the shares have already increased their underlying dividends by more than 5% over the previous year even though we are less than half way through the current accounting period. So with the extra bunce of some special dividends, I anticipate the RIRP will resume its original brief of being a low maintenance have-and-hold portfolio.

For most of its life, low inflation means I was able to carry a few failures and sleepers in the RIRP, but rising inflation now forces me to be less indulgent. I shall be keeping a beady eye on companies unable or unwilling to raise their payouts, regardless of their high yields.

Paring out the dead wood

This time I must perform a similar exercise on the newer junior portfolio, the Income for Life, constructed over a one year period designed to deliver at least 5% income rising so as to beat inflation. The first was a deliberately ambitious challenge, and the second is increasingly becoming so.

Table 2 shows that in its second year, and its first year being fully invested, the underlying return on the £100,000 capital was over 5.2%, boosted to over 6% by special dividends and an enforced share sale. 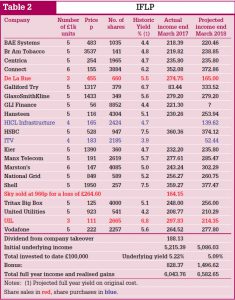 But just like Interserve in the RIRP, one of my holdings has turned into a cuckoo; and just like the takeover of Alternative Networks forced me to sell a share at a time not of my making, so the Fox bid for Sky is effectively forcing me to do the same. I have always justified my professed indifference to my shares’ capital values with the argument that the value of my share certificates does not pay the bills, but the dividend cheques do. And the nasty small print in the Fox bid is that Sky pays no dividends this year. The sex scandals at Fox are again raising concerns as to whether the UK should consider it a “fit and proper person” to own such an influential broadcaster outright, and frankly I cannot any longer afford to forgo any return on one twentieth of the portfolio.

So entirely aware that I am throwing away the chance of a 5%+ capital gain if and when the bid does go through, I am selling all my Sky shares for a small capital loss.

To compensate for this I am selling another chunk of the formerly high-yielding UIL, whose big capital gains have actually reduced the return on its current share price to under 4.6%. I am similarly cashing in £2,000 of the investment in De La Rue which still has to generate the dividend growth I want, but which for reasons I find as difficult to understand as UIL’s valuation, has risen by 50% since I bought it; since even I cannot resist banking a £1,000 capital gain to provide a war chest against future possible dividend disappointments.

All this generates nearly £9,000 cash of which I am using £8,000 to buy 4 units of two very different shares, each something of a gamble in their own way.

The first is what I hope will be a solid but unspectacular provider of income which will rise at least to match inflation: HICL Infrastructure, launched by HSBC back in 2006 as the first of what are now many infra-structure companies listed on the stock exchange. The nature of their contracts effectively allows investors a guaranteed inflation-linked return, unless the management lose track of their costs. Dividends have risen from 6p at launch to a target of 7.8p for the current year, bang in line with inflation over the period. Dividends are paid quarterly, which means this year we will only get three quarters of the projected 4.7% full year yield. In keeping with the lessons I have learned late in life about sometimes dipping into capital gains when they seem too good to be true, I am using the De La Rue and UIL profits minus the Sky loss to further boost the “bonus” line, already standing at nearly £500 because of which a welcome surprise special dividend from National Grid last month.

Building in the bonus

And for all my railings about the distortive effect of special dividends, I am buying my second share very much in the hope it will continue the pattern of the past 5 years by further supplementing its above average underlying dividend growth by generous regular special dividends. It is ITV which after some difficult years has found ways to continue to generate viewers and revenue despite the huge changes in viewing habits. 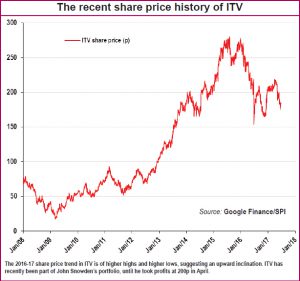 Underlying dividends have increased by two and a half times over just the past 5 years, and the projected percentage yield in the table is based on last year’s basic dividends. But the special dividend last year boosted the yield by more than two thirds. Unfortunately we will get only one dividend in our current year, but I am hoping for a bumper bonus next May.

The table shows we have some way to go to get underlying full year income even back up to last year’s £5,215. I am hoping GLIF will provide at least something to help narrow the existing £129 gap, but in view of the current share price around 14p I am not holding my breath. Clearly this is going to be a year when I shall have to dip into the war chest.

I realise of course that in doing so I am spending the two sources of money which I claim not to want, special dividends and realised capital gains. But when needs must, it is surely a fool who feels constrained by his own dogmas. And to salve my conscience I am pretty sure that by the year end next March I shall not have had to boost the income figures by more than last year’s £828 bonus, which prudent investors should have kept aside for precisely such a rainy day; but which I fully realise most of us will have spent.