A sense of deja vu surrounds me as i write, mingled with absolutely no Schadenfreude. Three months ago I wrote that “a surprise cut in the dividend of what had been one of my star performers …. forced me to apply dramatic surgery to the Rising Income Retirement Portfolio”. I then went on complacently to explain how nevertheless everything would come out rosy for the full year, and went on to apply similar dramatic surgery to the newer Income for Life portfolio.

In doing so I had chosen to ignore Sainsbury’s further small cut to its dividend, and had sadly overlooked its restated dividend policy. What I had not anticipated was that a month after the last article, Pearson’s new regime would be quite so ruthless in doing what the collapse in the share price had been screaming at me was likely: cutting the interim dividend by 72%, and with the likelihood of more cuts to come.

So it’s time for the pruning shears again, never mind the squeals: overall the RIRP garden is healthy enough to withstand some more surgery.

If I did nothing – which is the avowed purpose of the RIRP, and intended to require minimal management now it is nearly 10 years old – the combined effect of these two dividend cuts would have reduced my underlying income this year by more than 6% from £6,332 to £5,937. Special dividends and realised net capital profits would admittedly have boosted that by more than 7%, nearly twice the latest 3.9% RPI inflation rate; but the whole purpose of this portfolio is that it should be invested in shares whose underlying income is likely to rise by more than the rate of inflation without what I still regard essentially as window dressing in the form of strategic realisation of capital profits.

So I am forced again to take another look at the dividend growth prospects of some of my underperformers. Assuming a similar cut in the final dividend is on the way Pearson may only yield around 1.6% next year on its original purchase cost. Pearson claim the cut will enable them to pursue a “sustainable and progressive dividend that is comfortably covered by earnings”. The original RIRP rules required me to junk Pearson (and GLIF – see update opposite). But another lesson I have learned rather late in life is that nowadays holding on in these situations can make sense: as Legal & General and United Utilities have proved, if they get it right – and the stronger choices in the portfolio can carry them for a while – companies which have cut their dividends often subsequently deliver above average dividend growth. But I will be keeping a close eye on promises versus delivery.

The same is not true of Sainsbury, who have now delivered 3 years of gently declining dividend payments, leaving them yielding less than my low-dividend growth stock Reckitt Benckiser which has at least been delivering double digit growth from its pathetic start, and has allowed me to scalp some life-saving capital gains. Sainsbury’s have redefined their dividend policy as being to pay out half of earnings, but this is just the sort of unpredictability that I don’t want from a sector where Lidl has now become the biggest player – albeit only at the cost of a huge profits squeeze. As a privately owned German company, the owners can afford the long view, but some of us have rising post-Brexit bills to pay, so with many regrets, I have to eject Sainsbury, at 238p for a loss of £1,347, in the full knowledge that there is a possibility that I may be selling right at the bottom of its cycle.

Cash in the Bankers

To make up for the loss I shall repeat my previous raid on the shares of one of the several companies whose share price has shot ahead from the purchase price. I am selling one sixth of the shares we hold in Bankers Investment Trust. At 813p, on paper these are showing me an astonishing capital gain of 137%, though some of this reflects the too clever accounting in the early days of the RIRP when I used realised capital profits to deflate the purchase price of my reinvestments. I have become more transparent since.

This sale yields me a profit of £1,375 on the original investment, £28 more than the Sainsbury loss. Taking capital profits this way goes against the grain of the whole of my investment philosophy developed over the past 50 years since I first rashly invested some of my university grant in buying entirely unsuitable speculative commodity shares which fortuitously benefited from a surge in commodity prices on the outbreak of the Arab-Israeli 3 day war; I now realise I probably have almost as much to learn now as I did then.

Nevertheless I am taking a bit of a gamble with the proceeds, and reinvesting the six £1,000 Sainsbury units into Barratt Developments, the country’s biggest housebuilder. As shown by my previous inclusion of Galliford Try in the sister Income for Life portfolio, I do not share the post Brexit gloom for the housing sector, since I – perhaps naively – believe addressing the lack of housing supply will define the success of this and future governments. The gamble is that the business is notoriously cyclical and there is a danger I am buying in at the top of the cycle. The business has just delivered a near 20% rise in profits from its highest sales volume for nine years. 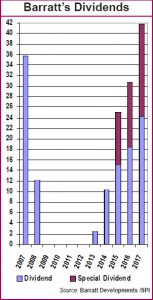 The chart shows the recent spectacular dividend growth – but also the dangers when things go wrong as happened after 2007. The shares go xd at the end of this month, which means we only capture some two thirds of the underlying dividends this year, but this is more than compensated for by the special dividend.

The sales of Sainsbury and Bankers produce £7,022 cash, so with an eye to boosting underlying dividend growth next year I am putting the remaining £1,000 into Lloyds whose dividend paying capacity I think still has some way to go, for all the reasons explained in Peter Shearlock’s lead article. To make up for the £97 dividend losses this year from the two sales, I am raiding some of the £173.52 special dividends which we will get from Barratt in November to include in this year’s underlying income.

Even so as Table 1 shows, despite all the companies shown in bold in the last column which have increased their dividends since the table was last published, total underlying dividend income is still some 2.7% down on last year, although of course more than compensated for by special dividends and realised capital profits. 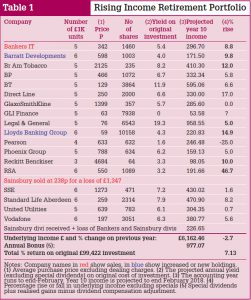 The summary Table 2 for IFL shows that the changes made three months ago are succeeding in their aim of keeping underlying average dividend growth comfortably ahead of inflation.

However the figures in blue show those payments made in dollars or euros where the effect of foreign currency moves can produce some quite perverse results, as in the case of HSBC; though as Shell and Vodafone prove, it is very much a case of swings and roundabouts.