The Rising Income Retirement Portfolio and its more recent offspring the Income for Life Portfolio were designed as a selection of shares requiring minimum maintenance once fully invested, delivering dividend increases above the rate of inflation.

The RIRP was constructed over a 7 year period through drip investments, designed to maximise the benefit of pound cost averaging, and has been fully invested since 2015. Table 1 shows it is more than fulfilling its mandate. 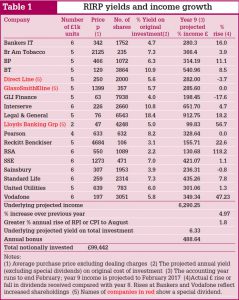 Projected underlying income for the year to next February will be nearly 5% up on last year, and that’s before non-recurring items – which I now treat as “bonuses” – which bring the total rise in income for the year to 13%. This compares with the 1.8% rise in inflation according to the RPI over the most recent 12 months. The underlying yield on the sums originally invested is up by more than 50%, from 4% net after basic rate tax to 6.3%.

However this meant making some compromises between the fund’s need for an income significantly higher than is available from the FTSE 100 (and way ahead of anything on offer at any reputable bank), and its long term aim – the same as the RIRP, to deliver dividend increases which exceed the rate of inflation.

I made no secret of the fact that once fully invested it was likely I would have to revisit some of the shares initially bought just as income-boosters, but whose growth of income was likely to prove a drag on the fund’s longer term performance.

Table 2 shows how the dividends this year of the twenty current components of the fund compare with those declared the previous year. Until the most recently reported dividend increases from Kier, Manx and Sky, the reductions at GLIF meant the average underlying rises were barely keeping pace with the 1.8% inflation rate.

Well ahead of inflation

Now it is clear that we will finish the year usefully ahead of any likely inflation rate, but for the longer term any shares showing lower dividend rises than the current inflation rate obviously require re-examination as to whether it makes sense to keep them.

Some caution is needed: the IFL is only half way through its accounting year, so some – such as De La Rue – have not yet declared both their dividends for the year. On the other hand, Centrica has done, and is clearly not going to keep our spending power from being squeezed in future unless it ups its game next year. It was admittedly a risky candidate for inclusion in the first place because it had previously cut its dividend, but history shows that if you buy such companies after the nasty medicine, they can sometimes outperform – in dividend and capital terms – as both United Utilities and Lloyds have proved within the RIRP. I will watch any such underperformers carefully next year.

The big scar in both portfolios is of course GLIF, the classic illustration of something looking too good to be true and turning out to be precisely that. A boardroom coup has already seen the dividend halved, and now the company says from 2017 dividends will be fully covered by sustainable operating income plus the proceeds of any sales of investments, which must imply another cut.

The only silver lining is the suggestion that this will provide the basis for the payment of a “progressive dividend”, which is what both portfolios are all about. The original guidelines for the RIRP disqualified any company which had a history of dividend cuts, and by implication required me to eject any company which did so after I had bought, but this proved too rigid in the testing times following the banking crisis during which the portfolio was launched. I am leaving GLIF in both portfolios for the time being as examples of how even the odd disaster can be absorbed, even within only a 20-share portfolio.

The RIRP was actually launched on a disaster I would rather now forget, and has been carrying Lloyds Banking Group almost since launch, and RSA for several years recently. In investing no one is infallible, and while I obviously prefer not to choose lemons, history shows that when I have done, jettisoning them too hastily is often a costly error – not least because the “replacement cost” is often very high. For instance, on its current reduced payout, GLIF still yields 4.4% on its original investment, but because the share price has been understandably punished, I would need to get over 10% on any new investment to avoid a reduction in ongoing income.

Similarly the original RIRP guidelines required me to ignore capital ups and downs as random noise behind the sole objective of delivering rising dividends, and by and large I did.

But the shorter timeframe and need to underpin growth means I cannot be so intellectually detached with the IFL. So when I see UIL, one of my star income boosters but with no history of rising dividends, showing a capital gain of over 66% for reasons I cannot imagine from any published information, I have to look at how I might benefit.

I bought UIL at 111p to yield 6.8%, but at the current market price of 187p its dividend yield for new investors is just 4%. So if I can find a share with the prospects of dividend growth which currently yields that or more, I would be quids in selling UIL and reinvesting.

I am therefore going to sell enough UIL shares to buy £2,000 of Galliford Try. As a Brexiteer I have never understood why the doom-mongering should apply to housebuilders, since I do not accept that post Brexit Britain will see us all living in caves.

Galliford is one of many good companies whose shares have not recovered from their immediate post Brexit markdowns.

The company recently released a splendid set of results and boosted the year’s total payout by over 20%. Despite the 17% rise in its share price since the announcement, the shares still yield over 6% assuming the payout can be maintained; I have every expectation that it will be increased further until the housebuilding cycle goes into decline.

I don’t expect that to happen in the foreseeable future. While I have no special insight into the minds of Messrs May and Hammond, I do know that if they are serious about capturing the true centre ground of British politics, they could do far worse than do all in their power to see as many houses as possible built between now and the next election.

But I shall wait for the November Autumn Economic Statement before committing myself further.

UIL has just paid the second of its quarterly dividends, so any shares I sell now will only lose me half a year’s income. The Galliford shares don’t go exdividend until October 27 so this year I will pick up their final dividend, more than two thirds of the annual payout.

The maths is a no-brainer. If I sell enough UIL shares to buy £2,000 Galliford Try I lose £40 UIL income this year, but gain £86 from Galliford; in the full year next year the Galliford dividends will be well ahead of UIL assuming there is no increase, which is unlikely.

These changes will be reflected in the table with the next article in January, when I will look at some of the other dividend laggards in my list such as GSK. If they are still showing capital gains, I will see if I can repeat the trick, though in reality it is unlikely I shall be able to switch from all the higher yielding underperformers without some short term cost to my income.